What would Gran do? 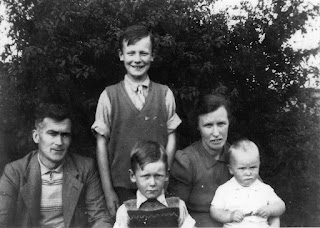 This is a rare precious photo of my grandparents and their 3 boys taken in 1944.  My dad is the baby on my Gran's knee.  Sadly just a few weeks after this picture was taken, my Grandpa died of pneumonia leaving my Gran to raise those 3 boys on her own.  In 1944 there was no NHS or benefit system.  Grandpa didn't serve in the army as he had a protected job as a baker with the Co op so Gran didn't even get a war widow's pension.  She worked 3 jobs just to put food on the table and relied on hand me down clothes from her sisters and their children.  She lived and raised those boys in a tiny 2 bedroomed pre fab house that was supposed to be post war temporary accommodation.  She lived there for 24 years before being re housed.

She died when I was 14.  I didn't appreciate at the time how difficult her life must have been.  I didn't appreciate all the skills she had that were never passed on.  She could knit, crochet, sew, bake, make jam and chutney from foraged fruits, grew her own veg and could feed an army of hungry kids at the drop of a hat. She lived a frugal life because she had no alternative.  She never wasted a scrap of food, she reused and recycled everything decades before it became fashionable.  Now I'm not romanticising her cos what you don't see in that photo is that she had flaming red hair.  And the stereotypical temper to go with it!! She was quick to rise but equally quick to move on.

About 19 months ago around the time when my life changed forever, my uncle (in the fair isle jumper) gave my mum a suitcase of photos and items that belonged to my gran.  He'd had them stored in his house after she died but never sorted through them.  He thought mum might like to see what was in it.  Alongside old recipe books, magazine clippings and handwritten notes we found this photo.  No one knew it existed.  I have a copy of her wedding photo on my wall so I see her every morning when I wake up.  But seeing her with her husband and 3 boys really hit home to me just how much she had lost.  She was a single parent to 3 boys, like me.

I truly believe it was the universe sending me a sign.  No matter how tough life seemed to be for me at that time, this was a reminder that I came from a strong woman who had survived.  Not only could I survive but I would thrive.

I often find myself asking 'What would Gran do?' when I'm faced with a problem.  Ok, trying to work out the best broadband deal or decide which mobile phone to get when my contract runs out next month aren't the kind of problems she would have faced.  But not wasting food, recycling and reusing stuff, making my money go further, shopping around for the best deals on something (she famously walked miles to save money on sugar during jam season) and just simply appreciating what I do have all make me think of her :-)

Email ThisBlogThis!Share to TwitterShare to FacebookShare to Pinterest
Labels: gran