Can't live without them? 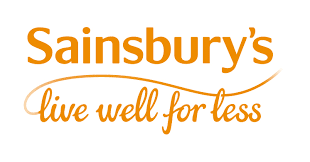 I really wish I could live without supermarkets.  I've long avoided Asda (due to the Walmart connection and how they treat their staff), rarely visit Tesco (dominating in some towns resulting in small shops losing business) and now will avoid Morrison's thanks to their treatment of farmers highlighted in HFW's programme War on Waste plus the revelation that British dairy farmers are NOT receiving all the extra money from the sale of their milk.  How did we get to the point where supermarkets have so much power?  We're tempted by the 'convenience' of getting it all in one place.  In other words we're too lazy/busy to visit more than one shop to get everything we need.  They know this and encourage us in with the promise of making it easy.
And I hold my hands up.  I hate food shopping now I have to go at the weekend or after work. So doing most of it online seems like a good idea.  I know lots of people who've had a terrible time with their deliveries but in all the years I've done it I never have.  Until now.  I'm currently in dispute with Sainsbury's over an undelivered order that they took full payment for.  A total of £83.25 to be exact.  That's a huge chunk out of my food budget as I was stocking up at the start of the month. I've made several phone calls now and have been assured it will be refunded in the 'next few days.' That was a week ago. It should never have been taken in the first place and I'm still waiting to get MY money back *sighs*
Could I live without a supermarket? It's doable and would take a lot of effort/time but it's something I want to give some serious thought to.  I could support local farmers and stick a finger up at Tesco/Asda/Morrison's/Sainsbury's!! Watch this space ;-) 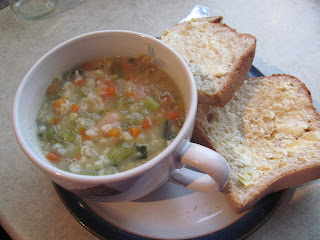 Winter weather requires soup!  I didn't have any chicken to make my favourite Chicken n Rice soup (chicken stock, rice, carrots and leeks) so knocked up this veggie version using whatever was lying around.
Vegetarian 'Chicken' n Rice soup
3/4 bag frozen chopped carrots/onion/celery (it was all that was left in my freezer)
3 'handfuls' rice
2 'handfuls' red lentils
6 teeny tiny leeks from my garden
1 carton of butter beans (only 5 months past the use by date!)
enough veg stock to cover
No real recipe, just put everything in the pot except the leeks and butter beans.  Bring to boil and simmer until rice is cooked then add leeks and butter beans for last 5 mins.  That's it.  The Teenager declared it 'delicious.' I had mine with some GF home made bread. 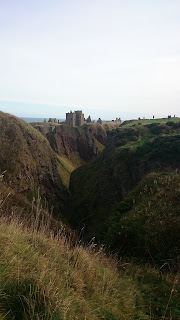 OH and I managed to sneak away for a night in the campervan.  We both have sole custody of our children with very absent exes and rarely have a night where it's just us being a couple. We ended up in Stonehaven, a lovely place I'd never visited before despite having a family connection to it.  We wild camped in the car park to Dunnottar Castle, full of history. We do like our ruined castles ;-)