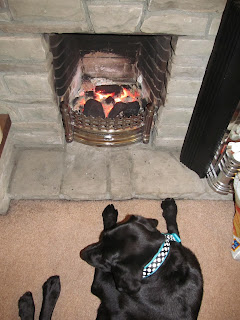 Last year I blocked up my fireplace and started using an electric fire to boost the room temperature when it was cold.  My thinking at the time was that it would be cheaper to use the electric fire when needed instead of buying coal/logs etc to build a real fire.  I was also conscious that I was losing precious heat up the chimney when a fire wasn't lit (although when the fire is lit much of the heat goes up the chimney anyway!) 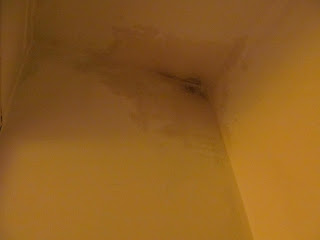 Then I discovered this damp mould patch inside my bedroom wardrobe which is adjacent to the chimney wall upstairs.  After a thorough investigation by OH who crawled into the tiny roof space (where I also discovered I am well insulated!) he worked out it was probably a build up of condensation inside the chimney as it wasn't in use.  Basically any moisture that got in wasn't being dried off by the heat from a fire.

So tonight we pulled out the chimney balloon etc and lit a real fire.  I think Emma liked it :-)

I had already been pondering on the feasibility of a woodburner as I really miss having one.  Several nights this week when I've gone outside to put the chickens to bed I've smelled the lovely smell of my neighbours' woodburner.  They really splashed out and installed one that heats 2 rooms.  They're also convinced it warms the upstairs bedroom (ie the same one as mine) and that they rarely need the heating on.

Email ThisBlogThis!Share to TwitterShare to FacebookShare to Pinterest
Labels: woodburners