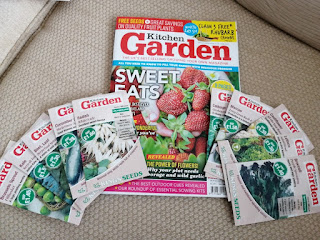 I checked the weather app on my phone on Friday and saw that yesterday was to be very wet and windy (accurate!) and today was to be mainly dry and sunny (fairly accurate!!)  I decided that I would be able to have a gardening weekend.  I bought a copy of Kitchen Garden as it had 10 'free' packets of seeds and a pair of gardening gloves.  Once I'd done all the boring essential household stuff I settled down to read and make plans.

When I was in Australia over Christmas I wrote out a detailed plan of what I wanted to grow in the garden and allotment this year.  Some of the free seeds I got were on my plan.  And those that weren't, I ordered from Real Seeds last night. 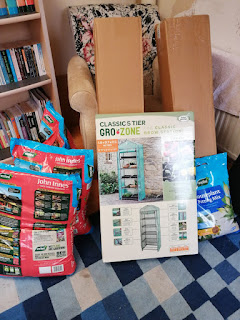 I went to Dobbies bright and early this morning to get some seed compost.  I ended up getting a few extra things as well!!  This 5 tier mini greenhouse was reduced from £44.99 to £29.99.  I had a crazy idea that I could start off lots more seeds indoors in my study.  It gets lots of light thanks to a rooflight/skylight and some direct sun towards the end of the day. 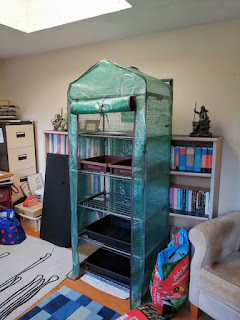 I rescued all the trays that were lying around outside and gave them a good scrub.  I have some old tote trays at school I could also use as we upgraded all our trays last year.  I've been saving toilet roll tubes, yoghurt pots etc to re use as plant pots.  They'll fit nicely into these trays 😇 When the weather warms up (usually a month after the rest of the UK!) I'll be able to move it outside.  Or at least that's the plan!! 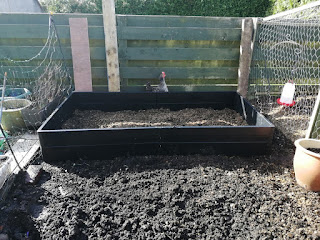 The 2 brown boxes in the second photo above were my Link-a-Bord raised bed from Harrod Horticultural made of recycled plastic and guaranteed for 20 years! It was so easy to assemble by myself and fitted perfectly into the space left behind by my polytunnel.  It's 2 metres by 1 metre.  I started to put in a base layer of old chicken bedding and Tuppence came to inspect it! 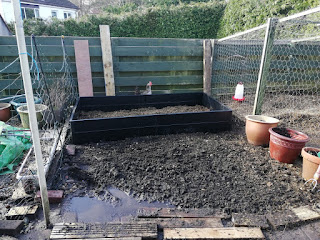 Part of the patio is under the puddle is on the left as it curves round so there isn't enough room for another bed the same size.  But there is room for a smaller one on the right. 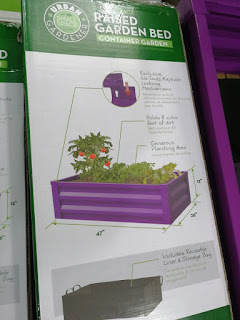 I saw this purple metal one in Dobbies and I was really tempted!  But it wouldn't fit in the space 😒 So I've ordered another smaller Link-a-Bord one instead.  Hopefully by the time the school Easter holiday rolls round, my back garden prep will be finished and I'll be ready to make a start on the allotment.  The AGM is in 2 weeks and I'm hoping that I might get a full plot 👍

Gardeners World starts again in 2 weeks (Hello Monty Don! 💖) so it's starting to feel that gardening time is here again 🌱🌿🌸
Posted by Ali at 17:53