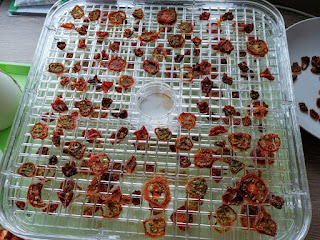 The cherry tomatoes took 16 hours in my dehydrator.  I'm in a dehydrating group on FB and was worried about over doing them.  Apparently that's pretty impossible!! They are very crispy!  I had 4 trays like this.

On a completely different note, did you know that you can dehydrate muffins to make biscotti?? Totally trying that!!! 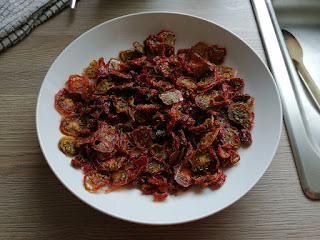 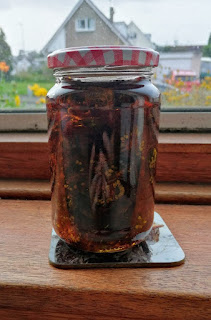 They filled a 1lb jar with olive oil.  I had some left over so put some in a wee jar with herbs and dried minced garlic.  If they're horrible at least I won't have spoiled the whole batch.  Jars are in fridge now.  I'll report back on the taste in a few weeks. 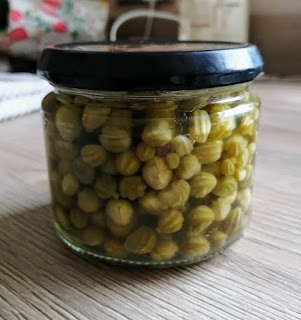 I also pickled the nasturtium seeds.  That wide mouthed jar holds about 1 and 1/2 cups of the seeds.  They're brilliant scattered over veg or salad for a salty/vinegary tang! 😋
I'm currently researching what to do with all my green chillies.  Some may turn red but looks like I've got a glut of green de Cayennes.  Any ideas?
Posted by Ali at 10:03

Email ThisBlogThis!Share to TwitterShare to FacebookShare to Pinterest
Labels: preserves