Storms and back at work prep 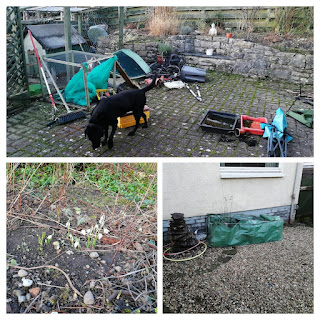 Storm Malik had fun in my back garden.  My wee greenhouse (despite being tied to the chicken enclosure) got blown about and all the contents were scattered across the garden.  Emma is helping me sort it out!  I managed to save some of the plants but the wind is picking up again so I'm hoping they survive Storm Corrie tonight.  I did smile to see some snowdrops blooming already 😊

I went back to work on Friday 😞 I tested negative on Thursday night which was day 10.  In an ideal world I would taken a few more days to get back on my feet but since 5 teachers were off school last week I felt 'slightly pressured' to return.  There seems to be a culture of "It's only a mild version, you've been off for the whole 10 day isolation period so you should be back at work now."  Talking to my colleagues there seems to be a wide range of symptoms and after effects.  I still have ringing ears and I'm exhausted.  Hey ho, only 2 weeks to half term.

Over the weekend I've been cooking and using up stuff in the fridge.  While I was isolating I wasn't allowed in the kitchen as it's a shared space with my son and his girlfriend.  They kindly cooked all my meals but I did notice that they haven't got the hang of fully using the oven when it's on.  For example they cooked 1 baked potato and 3 sausages for 1 meal for me.  I gently suggested they could have done loads of potatoes and could have cooked all the sausages to use in other meals.  They hadn't thought of that!! 🙄  But they know now! 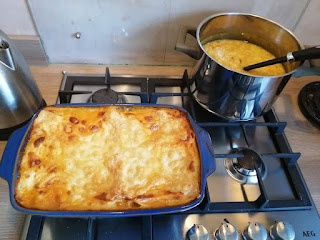 Yesterday I cooked a big pot of soup (7 portions for lunches) a vegetable lasagne (6 dinner portions) and a batch of sheet pancakes with last of the garden raspberries from the freezer.  I forgot to take a photo before I sliced and froze it. 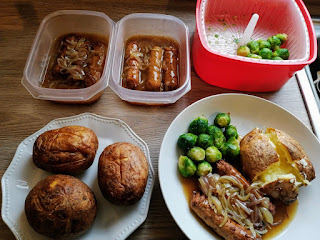 Today I did a load of Linda McCartney sausages and baked potatoes.  Enough for my Sunday lunch and some for meals for the rest of the week.  I do love having my meals prepped for the work week ahead. 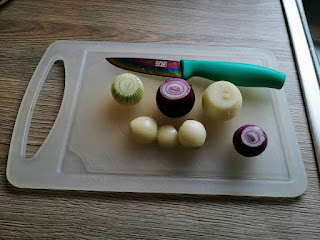 The onion gravy was made from the very last of my home grown onions.  These were the size of a golf ball or smaller!!  I'm impressed they lasted until January without any special storage.  They were just flung in a tray and kept in my wee greenhouse!!  A few had rotted but overall they kept well.  Annoyingly, I can't remember the varieties.

While it was fresh in my mind I ordered some onion sets, seed potatoes and beetroot seeds.  My vegetable planning is now complete.  I just need to sit on my hands for another month before I set up the heated propagator.  I'm in a few gardening/allotment groups on FB and some folk are already sowing seeds.  It's too early for my growing zone so I need to be patient.

In between doing some cooking I was being sensible and was resting.  I was looking at how much I've spent so far and trying to work out how much money I've saved in Month 1 of my 4 year challenge.  Tomorrow is the last day of January (already!!!) so I'll do a financial round up then.  I'm hoping I'm on track!!

Email ThisBlogThis!Share to TwitterShare to FacebookShare to Pinterest
Labels: 4 year challenge, allotment, garden, use it up