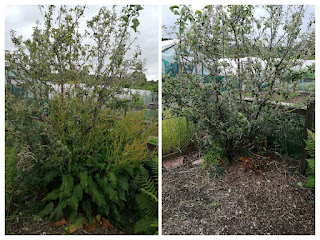 I spent a couple of hours on the plot yesterday clearing weeds.  I've declared today a day of rest as I worked hard and might have over done it.  My poor apple tree had a huge dock growing up it.  That's gone!  I discovered that docks are in fact edible and their leaves were once used to wrap butter and cheese. 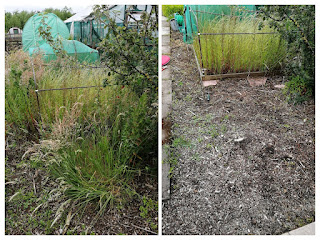 The bark chipped area beside the tree and in front of the seating area was full of grassy weeds.  Also gone now!! 🎉 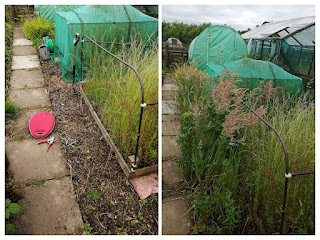 And the side of the path opposite my potatoes is also now mostly clear of weeds!  It took 2 hours and I  filled 5 large rubble sacks.  Luckily my brown bin is due to be emptied this week so it's now full of the weeds.  I wanted as many as possible of the weed seeds off the plot.

Weeding is very satisfying.  I put the sacks in the wheelbarrow to carry them to the car.  On my way back one of the plot holders commented on how breathless I was!!  And that was from an octogenarian!!!!!

Next step is to remove all weeds from the 2 raised bed areas (on the right in above photo) and get them ready for planting.  I might pop out to Dobbies this afternoon and see if they have any courgette plants or similar.  Or I might just do some knitting and watch something on catch up as we're having very heavy showers today ☔

I'm also tired because I was 'out out' on Saturday night.  I got a last minute call from a friend who had a spare ticket for Priscilla Queen of the Dessert.  Her daughter was performing in it.  It was a fabulous night but even socialising takes a lot of energy!

Email ThisBlogThis!Share to TwitterShare to FacebookShare to Pinterest
Labels: 50 days of Summer, allotment