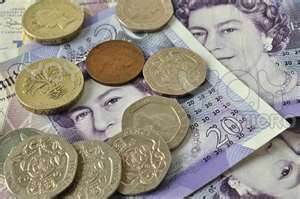 There are plenty of people out there who can give proper financial advice so the following post is written from a purely personal viewpoint.

When I unexpectedly became a single parent I was in a financial mess.  Not from debt so I was lucky in that respect but I didn't have my own bank account, I didn't have a credit card and I had no savings.  For the last 24 years I had given financial control to someone else.  Everything was in joint names but as the non earner I had no financial clout.  I was removed from all the joint accounts.

Anyone ever tried to open a bank account recently?  It's not easy.  I spent a whole afternoon in my bank manager's office trying to open an account.  I had my passport and driving licence as proof of identity but I had no utility bills with my name on them.  I didn't have a job and therefore had no payslips to prove I had an income.  It was a humiliating experience.  Luckily my bank manager worked really hard on my behalf and I eventually got an account opened.

So once I had a bank account the next step was getting a credit card.  I thought this would be easy.  The news was full of how easy it was to get a card and run up huge debts.  I didn't want to spend, spend, spend.  I just needed a card for emergencies as I had no savings to fall back on. I was declined by several card companies including my own bank!!  Not because I had a bad credit rating.  I had NO credit rating at all because I had always been the additional card holder.  It took a while but I eventually got one and have been building up a good credit rating by using my card sensibly and paying it all off at the end of the month.

Looking back I was so naive.  I remember when I first got married my granny told me to always have some 'running away money.'  Wise words in retrospect!!   I'm not really sure how it happened but over the years I was made to believe that I was useless when it came to money.  I know now that's not true but it's taken the last 18 months to find out.  At 46 I'm finally in full control of my own finances.

As parents we have to teach our children about handling money responsibly but girls in particular need to learn to be financially independent even in a long term relationship.  My parents never discussed money with me but I talk about it with my son all the time.  He knows we're on a limited budget but we make some spending choices together.  He has his own bank account and he now manages his own money.  He's responsible for his own phone bill, buying non school clothes and his own entertainment costs. Already I can see he's developing good habits and we laugh when he gets his bank statement telling him that he's earned 4p in interest that month!

I hope I'm setting a good example for him and the other young people in my life.  We keep hearing that the world is in a financial mess thanks to my generation getting it so wrong.  I want the next generation to get it right.  Look after the pennies and all that.........

Email ThisBlogThis!Share to TwitterShare to FacebookShare to Pinterest
Labels: savings