I have a rather large stash of yarn.  I could never resist a gorgeous colour (usually pink) or a bargain.  The John Lewis sale was always my weakness.  But at some point I realised I was accumulating yarn quicker than I was able to use it.  So I put myself on a yarn diet which means you can only buy accessories like needles or buttons.  Then I gathered up all my yarn in one place.  It wasn't as bad as some fellow knitters I know but let's just say I haven't needed to buy any for 2 years except for one very special item to be revealed next month ;-) and 2 balls of cheap cream.

Making Afghans or big blankets is a great way to use up yarn.  I bought myself a large crochet hook (size 9mm) and started on the Big Pink Blankie.  This is my third crocheted one. 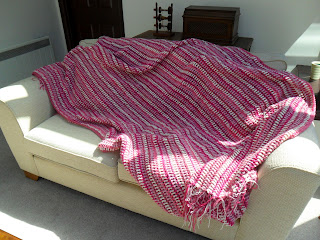 It's mostly double knitting yarn doubled or chunky yarns so it grew quickly.  I've only been crocheting for a few years, taught by an American friend.  I get mixed up between UK and US crochet terms but think it's basically a treble stitch (UK) but you go into the space below instead of the chain.  Apologies if any crochet experts are reading this!! 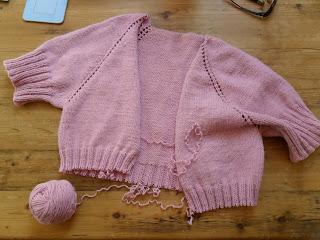 The 'pattern' is one row pink, one row cream, one row pink, one row pale pink.  And repeat until the yarn runs out.  The pinks are all varied odd balls that I've acquired over the years.  The cream was a pound shop bargain and the pale pink is from an unravelled cardigan.  It's not quite finished yet.  It's a great project to work on while watching TV. 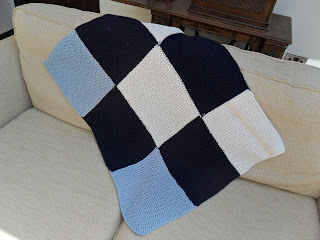 This smaller throw was knitted using some bargain Debbie Bliss Cashmerino I picked up in the JL sale ages ago.  More of a lap blanket but it's so soft and cosy.  And done on big needles so it was quick to knit!
Posted by Ali at 21:11