Yes, we Brits are preoccupied with the weather.  And we Scots are doubly obsessed with wind and rain.  So far it's been a wet summer here, interspersed with a few dry-ish warm-ish days.  In fact it's been so chilly at night this past week I've lit the woodburner and switched the Aga back on.
Thanks to the warm, damp and cool weather lots of bugs and viruses are doing the rounds.  We seem to be sharing a nasty cold one at the moment.  I've been dosing myself with hot honey and lemon to soothe my raspy throat and cough.
I keep seeing this cold remedy using honey and lemons on the internet so thought I'd give it a go.  So when I went to Sainsbury's to buy more honey I was delighted to see Manuka honey with 20% off.  I bought 2 x 340g jars of the 5+ at £6.55 each.  I would have loved to have bought some of the 10+ but it's slightly out of my budget.  The higher the NPA number the better the antibacterial properties but also has a higher price tag! 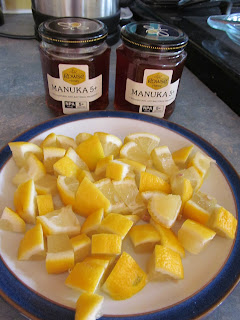 So I chopped up 2 unwaxed lemons and added them to a clean jar.  Then I poured over a full jar of the Manuka honey.  The instructions I've seen said pour honey until it's about a third of the way up the jar. 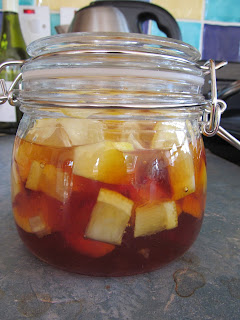 Once it settled it was about a third of the jar, this pic was taken almost straight away so it hadn't settled yet.  It now gets stored in the fridge for a few weeks until the lemons turn a deep brown colour and it looks marmaladey. Then you just add a spoonful to a mug and add boiling water for a soothing healing drink. Some recipes say use raw honey and some say any honey is fine.  The Manuka honey feels like a halfway compromise. I'll report back if it works :-) 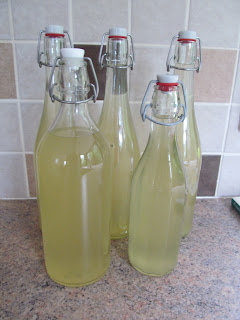 In an attempt to feel more summery I made some elderflower cordial.  I just love the smell of it. The recipe is in the Soup Kitchen.

I've changed the button at the top from My Other Blog to Ali's Soup Kitchen.  All detailed recipes from now on will be in the Soup Kitchen
Posted by Ali at 17:21