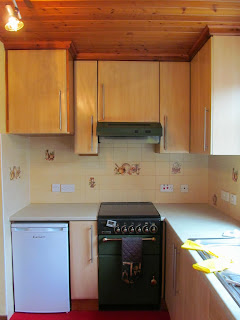 I had my power tools back out to remove the wall cupboards above the cooker.  Looks nice in the photo but they were covered in grease!!  I think everything was coated in 30 years worth of chip pan grease.  It was so bad I was actually retching.  And my hands were covered in the stuff. 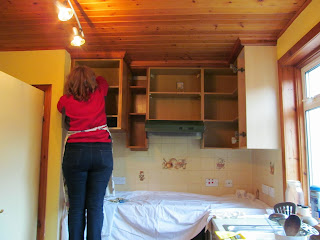 I took the doors off first.  The hinged one on the right of the photo was hung by a single screw (which I didn't know) so as I unscrewed one hinge the door fell off.  Missed my head by centimetres and left a huge dent in my kitchen sink.  Since I'm not replacing the sink it'll be a reminder of the day I nearly brained myself!!! 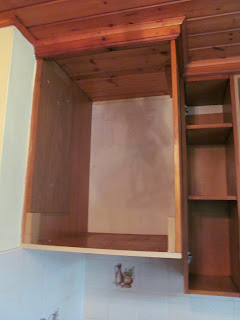 I was so pleased to see that the wooden ceiling continued above the cupboards after all.  No faffing about trying to replace bits to match.  It's all being painted white so the difference in colour doesn't matter. 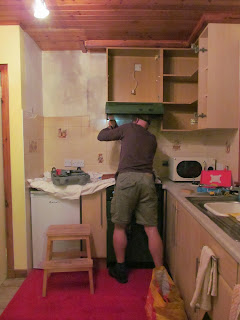 When it comes to the electrical stuff I know my limits so OH got stuck in with his kit.  Another retching exercise for both of us as the cooker hood was removed. 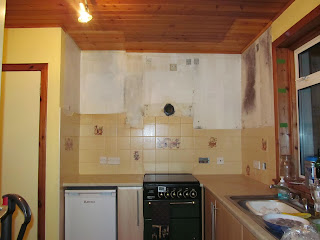 Ta da!!! My tiny north facing kitchen looks bigger and brighter already.  The tiles will be next, the new cooker gets fitted this week and then I get a plasterer in to skim the walls ready for decorating.  I'll be putting up some shelves and re tiling it hopefully within the next few weeks.

My lovely mum helped me take all the disgusting units to the waste recycling centre so it's all gone from the house.  Slowly getting there and making it all mine :-)
Posted by Ali at 16:19