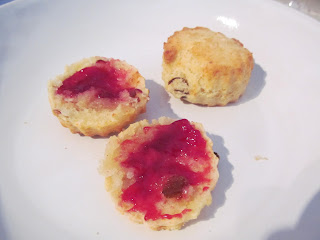 I really shouldn't make big plans for the school holidays, they always get scuppered.  Last summer, I put my back out.  This summer I developed stomach issues that needed kick ass antibiotics and painkillers *sighs*
One thing I hadn't taken into account was that in removing gluten from my diet I also removed the easiest source of fibre in wholewheat. Being stressed for the last few months at work followed by being lazy about my holiday eating habits (not enough fruit n veg and too many 'treats') resulted in a bit of a collapse.  I had an infected colon.  Abdominal pain akin to labour pain isn't fun!  But I'm nearly back to normal, with a mission to consciously watch my fibre intake.  I'm hoping it was a temporary issue fixable by diet and not the long term diagnosis of diverticulitis my GP suggests :-( 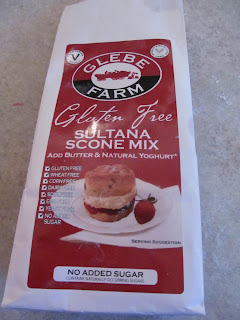 So I've been taking it easy, just doing a few wee bits n pieces of painting and sorting out stuff.  Today I finished waxing my chalk painted kitchen cupboard doors. And as a reward I baked myself some scones.  Not from scratch but from this mix that's been in the store cupboard for ages.  I added Pure sunflower spread and some sheep's yoghurt to the mix.  I had some with my lovely mum's raspberry jelly.  They were really tasty!