Shopping from my freezer and storecupboard 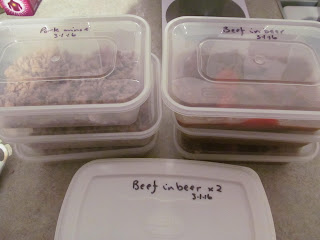 My eldest son phoned me in a panic this morning.  He was expecting a Tesco delivery but they phoned to say his card had been declined and wouldn't be able to deliver his order.  I think I've said before he has ME/CFS and mental health issues and survives (I can't call it living) on benefits so stuff like this really throws him.  He said he 'literally has no food.' *insert rolling eyes*

After some interrogation quick questions I established that he didn't have enough money in his account to cover the cost of the delivery (although he has plenty of cash in hand after Christmas!) and found out what he actually needed.  Then I went 'shopping' in my own freezer and storecupboard to tide him over for a few days while the money I transferred showed up in his account.  Banks were closed today here in Scotland.

I took him a portion of the beef in beer casserole I made last night and a dish of mashed potatoes for tonight's meal.  I cut a huge chunk of cheese off the big block I always have in the fridge.  I scooped some butter into an empty spread tub. I took a carton of apple juice and 2 of the nectarines from my yellow stickered jackpot.  I'd just made a batch of butternut and apple soup so he got some of that.  He has plenty of pasta and rice in his cupboard; bread, meatballs and chicken kiev in the freezer and tins of baked beans and spaghetti.  I made him a 2 day meal plan so he's sorted until Thursday when he'll be able to get a new delivery ordered.  Suspect I'll be doing more of this as he's about to lose some of his benefits and he can just cover his rent but nothing else :-( 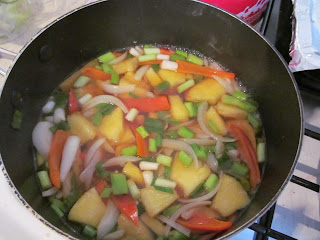 As well as making soup this morning I made a batch of sweet and sour sauce to use up the pineapple, peppers and spring onions from yesterday's haul.  I left out the oil so instead of frying the veggies I just put everything in a pan and brought it to the boil and simmered for 5 mins.  It's very light and fresh.  I'll be having it with some chicken tonight.

Email ThisBlogThis!Share to TwitterShare to FacebookShare to Pinterest
Labels: savings, storecupboard, use it up