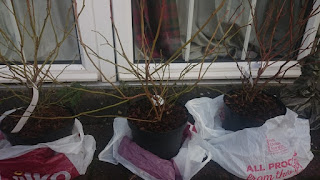 They don't look much atm but these 3 bare bushes are my blueberry collection.  My lovely mum had an online flash sale offer on fruit bushes so bought some for me, my sister and herself.  There are 3 varieties so they'll produce berries throughout the summer once they're established.  I'll be planting them in pots so I can take them with me if/when I move house. 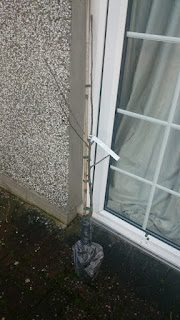 Likewise my cordon apple trees.  They don't look very alive so need to get them potted up properly as soon as I can source some reasonably priced big blue pots. 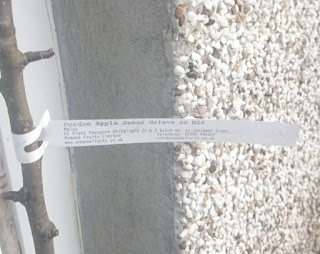 I chose varieties that are known to thrive in our damp Scottish climate (!!) My parents had a James Grieve tree years ago so I know what they taste like. 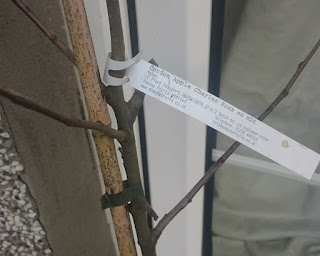 Charles Ross is also an old Scottish variety.  Both are self fertile but are in the same pollination group.  My plan is to position them at the front of the house as it's south facing and gets the sun all day.  We do get sun sometimes!! 😉 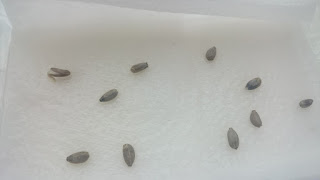 I had almost give up on my old artichoke seeds germinating.  But when I checked this morning one seed has sprouted!! That's only a 10% success rate.  I'm tempted to try and pot it up.  I'll have a look for some online advice on this.  Anyone done this before? 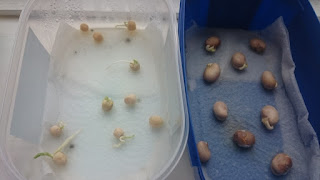 The peas and beans have fared better at 60%.  They're pretty hardy and are always recommended by preppers for WTSHTF!!  I can see why. 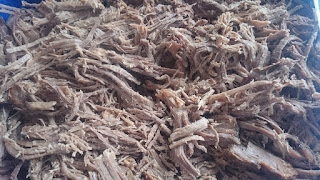 On the food front I had £10 worth of M&S vouchers from my credit card.  My spending has definitely decreased as that was a £5 reward for each of the last 2 quarters.  In the old days I used to get £40 ish a quarter, although that was running a house for 5.  I looked long and hard before deciding to 'spend' them on a beef joint.  It was 1.39kg and cost £11.11 (not quite free but good for a pound!) I cooked it in the slow cooker with a teeny amount of water, Worcester sauce and Tamari (gluten free soy sauce).  We love pulled beef so now I have lots of portions in the freezer for the coming weeks. 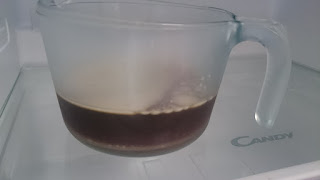 I like to chill the gravy overnight so the fat floats to the top.  I skim it off as I'm watching calories but you could save it and use it in something else.  I've fallen off the WW wagon a wee bit this week as I'm on holiday but so far I've lost 3kg (7lbs) 😎  I'd like to make it 5kg by my birthday next month so need to up the exercise as well. I've entered a 5k race in May so that's my motivation to get out running again.  I do hope my dodgy knee and hips are up to it! 🏃
Posted by Ali at 10:16