Don't throw that out!! 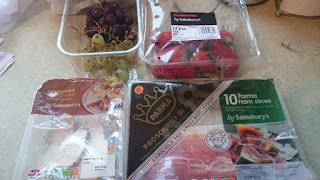 Yesterday and today were Staff Development days at work.  I'm now on holiday!  WOOHOO!!!! 🙌 On Development days we all bring in stuff for a shared lunch.  It's lovely and relaxed and there's usually enough food for both days.  But since we're now off until next Monday anything leftover will probably be unusable by next week.  The logical thing (well at least to me!) would be if there are leftovers from your contribution, take it home and use it up.

Nope!! Most said they didn't want it so a lot of perfectly good food went in the bin just because it had been opened!!  I managed to rescue some stuff but let's just say there was a lot of money went in that bin.  I'm sure my lovely colleagues already think I'm a bit mad but today I confirmed it for them.

I rescued a packet of Parma ham that had only had 1 slice used, half a pack of strawberries, half a pack of grapes and about a third of a pack of chargrilled chicken pieces.  I brought home the leftover goat's cheese I took in.  I've just looked up the cost of each of these (I'm sad but curious 😉)  Parma ham £4, strawberries £2, grapes £2 and chicken £2.50.  I reckon the above food is worth about £6 or £7.  And it was just going in the bin along with stuff I just couldn't eat or use (like cakes, french bread, Brie)

Sometimes I forget other people don't think like me.  But I regularly read and hear people talk about not having enough money.  No wonder if they waste their cash by chucking out perfectly good food!

Email ThisBlogThis!Share to TwitterShare to FacebookShare to Pinterest
Labels: free food, leftovers, use it up