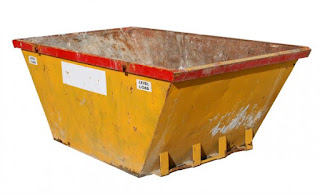 It's been a while since I've had to hire a skip (7 years to be exact) but I was rather shocked to find there's been a huge increase in cost.  I've just hired one for 7 days to clear my uncle's house and it will cost us £378!!!!

If I lived in the same council area I would just keep filling my car (or hire a van) and go to the recycling centre.  At least then I could sort it into the different materials.  But the recycling centre where he lived isn't fully open yet and only residents' cars (which are pre registered) can book a recycling slot.

So most of the stuff has to be skipped 😖 I'll sort and donate as much as I can but as charity shops aren't taking donations either, we're a bit stuck.  And we're now under a wee bit of time pressure from HM Revenue and Customs!  The government always get their money first!!! Good job I'm nearly on holiday and can get cracking.

On the plus side, I've spoken to yet another long lost cousin 😊

Email ThisBlogThis!Share to TwitterShare to FacebookShare to Pinterest
Labels: recycling