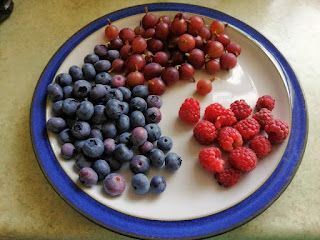 Today's soft fruits from my wee back garden.  The last of the raspberries, the only harvest of gooseberries as it's a very young bush and some blueberries that are now in full production.  No more strawberries though. 🍓 I eat some as I pick and then I pop the rest into the freezer.  The funny thing about all the soft fruit is that it ripens at completely different stages so there's never enough to do 'something' with it.  So all the berries are in the freezer to become either jam or used in smoothies.

Interestingly (at least to me!) the gooseberries are not the variety described on the label.  It says they are Hinnonmaki Gron (gron meaning green) and these gooseberries are definitely red!  They still taste nice even though they're quite small.  They were part of the fruit bush bundle I got last year from B&Q. 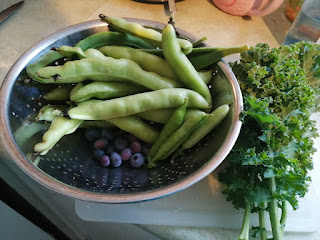 I'm currently garden sitting for my neighbours while they're away visiting family.  I'm pretty sure they said they'd be back on the 20th but no sign of them yet.  They have a greenhouse with tomatoes, peppers, chillies and some kind of squashes that they asked I water/check every day.  No problem except the last 2 weeks have been in the high 25+ degrees C or more every day.  So I felt I had to water their whole garden that is filled with fruit, veg and beautiful flowers.  Everything would be dead by now especially stuff in pots if I hadn't.  It takes me a good 30 mins every night to do theirs and then I do mine.  Luckily we don't have restrictions on our water use in Scotland and luckily I really like my neighbours.  They're very good to me. 😊 I have their permission to pick and eat anything that's ready. 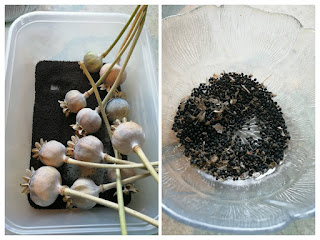 I followed Monty Don's tip from last week's Gardener's World and stripped back the poppy leaves to let the seed heads dry out a bit.  Then I saved the seeds. There's millions of them!!  I've added them to my stash of saved seeds that include bluebells and aquilegia. I'm actively trying to save seeds this year to use next year and save money by getting free plants.  I've also had a go at taking some cuttings from my blackcurrant bushes.  Not done it before so it's trial and error but worth a go to save some money and get free fruit bushes!  I'll let you know if they survive!
Posted by Ali at 21:46