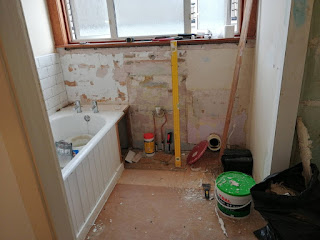 Finally, it got started today!  And they're working pretty quickly.  They had all the old stuff ripped out by lunchtime and some of the tiling started. 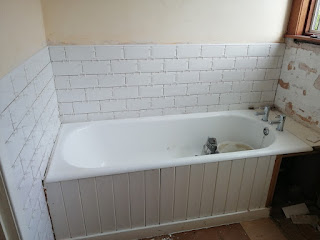 I decided not to replace the bath as it's a fabulous deep cast iron tub.  It may be original to the house (1967) or from the 70s.  It's actually in very good condition.  We've replaced the taps and plughole so they're modern.  The installer suggested re using some of the panelling taken from the sink cupboard to finish off the bath panel.  Fab bit of recycling!  All I'll need to do is sand and re paint.

I chose white subway tiles, to keep it classic and to make it easy to sell if I have to at some point.  Don't want to put buyers off with my quote "wacky colour schemes." 🙄😂 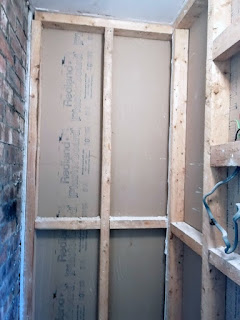 The shower enclosure has been taken back to the bare bricks.  I'm assuming they're putting in a protective waterproof layer of something before adding the splashwall.  Can you guess what colour I chose??? 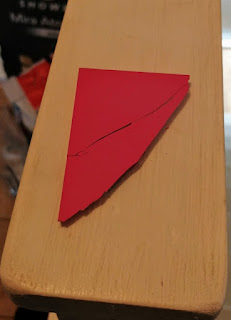 Not a great photo of the colour but I hope you can see it's shocking pink! 😎
Posted by Ali at 13:58