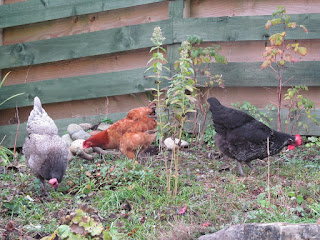 Sadly when I opened up the coop this morning I found my wee Penny Black had died overnight.  She was active and feisty until the last few days, where she allowed me to lift her back into the coop at night and even pet her.  I really wasn't surprised at all.  Her time had come.  She was the last of my original chickens.  She was over 6 years old which is old for a chicken and had out lived her 2 original pals and a rescued replacement!  In the above photo (from left to right) Merrida, Ginger Snap and Penny Black are enjoying their early free ranging days.

So I have just 1 chicken at the moment.  I was already registered with my local BHWT to rehome 3 chickens at their next rescue which should be in the New Year.  I can finally get rid of the old dog kennel coop.  Penny couldn't get up the ladder to the new Eglu so she still slept in the old coop and Tuppence used the Eglu.

Somehow I need to dismantle the old coop and remove it from the enclosure.  It's going to be tricky as the enclosure was built round the coop and has a sloping roof so you can't stand up fully unless you're at the edge.  I think some major power tools will be required!! 👷

Email ThisBlogThis!Share to TwitterShare to FacebookShare to Pinterest
Labels: chickens