I got an email last night detailing the upcoming AGM for the allotment association.  The last line simply said the allotments are currently flooded.  So I went down this morning just to have a wee look.  Pretty much the whole site had been flooded.  It was a mucky mess not even the sunshine could brighten it up.

Once I'd tidied up a wee bit I walked round the site and saw that loads of plot holders will need to start again.  Fences were down, sheds flooded and lots of raised beds were simply in pieces. It was really quite sad. 😧

Going forward I'll need to consider what I should do if the weather is stormy and the river is threatening to burst it's banks.  One thing to ask at the AGM next month.
Posted by Ali at 15:26 3 comments:

Email ThisBlogThis!Share to TwitterShare to FacebookShare to Pinterest
Labels: allotment 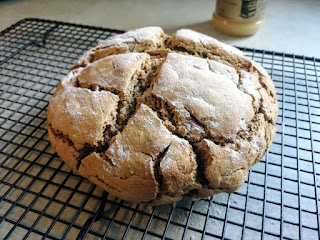 Gluten free bread is really expensive.  A small sourdough loaf or tiger loaf is usually between £3 and £3.50.  And they're just ok.  I've tried making my own using many different recipes and packet mixes over the years, some good but still expensive.  On a whim I made a very simple soda bread today (with GF flour, bicarbonate of soda, salt, honey and oat milk pre mixed with a tiny drop of cider vinegar).   And it tasted really good.  And best of all cost just under 50p to make!!

Edited to add: I've linked the recipe in the comments.  I used GF brown bread flour which makes my loaf a bit darker than the one in the link.  Next time I'll use my normal white GF flour. 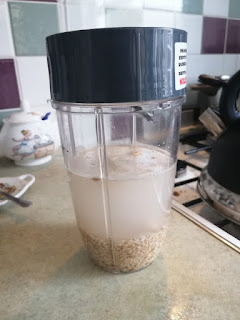 Oat milk is also pretty expensive, usually around £1.50 - £1.80 per litre unless it's on offer.  I made a batch in my Nutribullet.  Just 2 cups of water with 1/2 cup of oats and a few cashew nuts.  Blend for 30 seconds and strain.  I used muslin over a sieve and squeezed it. 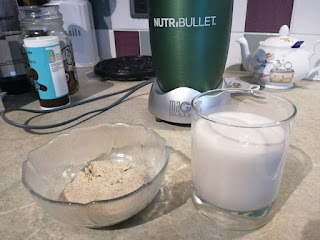 It tasted better than the one I usually buy!! And only cost about 40p (the cashews bumped up the cost but totally worth it!)  There was about 1/4 cup of oat fibre leftover once I strained it.  I gave it to the chickens but I've read that you can use it in recipes.  It even freezes well until you have a large amount.  More research is needed on that!

So I made gluten free bread and dairy free milk for under £1.  Result! 😊 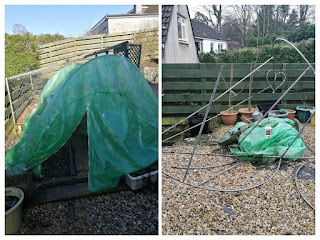 In between the rain, sleet, snow and brilliant sunshine this morning,  I took down the remains of the polytunnel.  The metal frame was completely bent and broken and the cover was ripped to shreds in places.  I removed all the pots and my cold frame.  My strawberry plants (wild and cultivated) have all survived but nothing else flourished.  I guess my climate just isn't right for growing throughout the Winter or my level of expertise isn't up to it!  Probably both!!😄 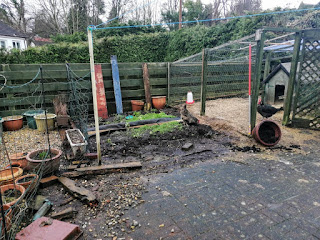 I moved the Omlet fencing to stop the girls getting onto the stones area.  I'll let them eat up the remains of my spinach, cabbages and spring onions that the slugs didn't get.  I also found a wee toad so hope he/she finds a new safe place to live away from curious chickens! 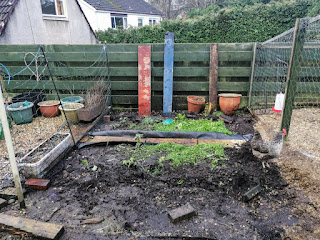 It really is a mucky area at the moment so I need to give some serious thought to how I'm going to use this space.  It's 3 metres by 3 metres.  It gets the sun in the morning and late afternoon in Winter and sun most of the day in Summer.  I'm thinking maybe some raised beds for herbs and edible flowers.  I'll need do some research on prices first.
Posted by Ali at 16:31 6 comments: 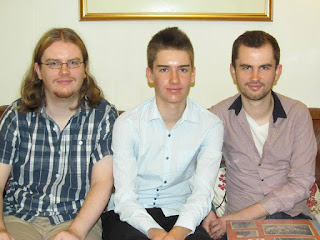 I was nominated by a dear friend to take part in the Facebook 10 days, 10 photos challenge where you had to post a photo that meant something to you without explanation.  I thought it would be nice to share here and explain why I chose my 10 photos 😊

The first one was my 3 boys.  This one was taken at my Dad's 70th birthday party, 6 years ago.  My middle son (on the right) is the one that lives in Australia so they are rarely together in the same place. 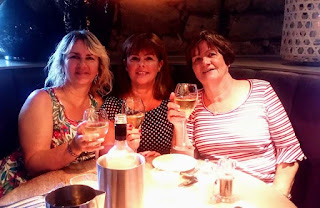 Day 2 was my mum and my sister on my sister's 50th birthday, 2 years ago. She lives near Guildford so we don't see each other very often. 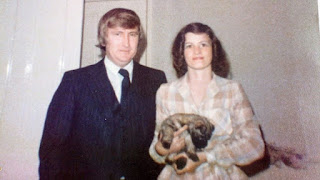 Day 3 was my mum and dad taken in 1978 or 79 when we got our first ever dog, a Cairn terrrier (like Toto in the Wizard of Oz!)  I'm not sure where they were going but dad rarely wore a suit! 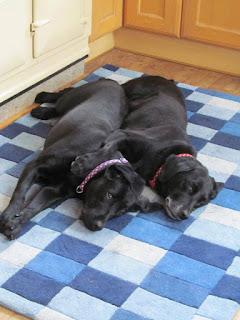 Day 4, my 2 gorgeous girls.  Lucy on the right was not happy when I got Emma.  It took a very long time for her accept this newcomer.  When I found them sleeping together in front of the Aga I had to take a picture of Lucy with her paw round Emma 😍 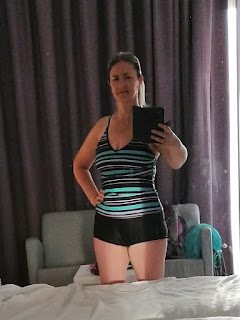 Day 5 was this selfie was taken in October last year in Gran Canaria.  It was my first ever solo holiday and I snapped this before I went to the pool one day.  When I looked at it later I realised that I'm in ok shape for my age and that I shouldn't be so hard on myself.  I'm almost 54 and that body has been through a lot.  Yet I'm still here and I'm healthy! 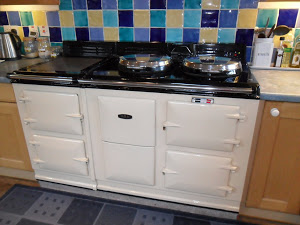 Day 6 was my Aga in my old house.  It meant a lot to me.  I loved cooking on it.  I still dream about re doing my wee kitchen in this house putting in a 2 oven Aga.  I have found a local company that sells and fits reconditioned Agas 😉 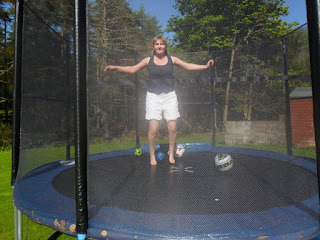 Day 7 was this one taken 9 years ago after I had been really ill for months with whooping cough.  I'd come out of my 24 year marriage and been through a breast cancer scare ( I had 3 small cysts).  My mental and physical health had been at an all time low.  This was my neighbour's trampoline and we had sent all the kids away to play football.  It was the first time in a very long time I had felt really happy. 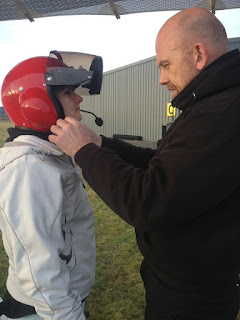 Day 8, me getting ready to be a passenger on a 2 person Microlight.  It was a huge deal for me as I'm terrified of flying and I was putting my complete trust in OH as he had just earned his pilot license to take a passenger!  I loved it, especially when we flew over my house and Stirling Castle 😊 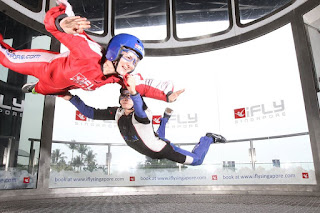 Day 9 - I would never ever do a parachute jump so this was the closest I would get.  When we were in Singapore for the wedding we had the chance to try indoor sky diving.  It was an amazing feeling and so freeing.  I would definitely recommend it. 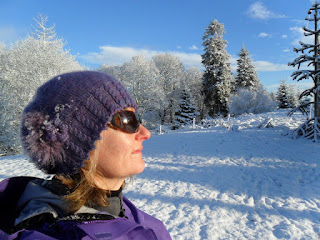 And my last one was a selfie taken during the terrible winter of 2010 and 2011 where I was snowed in for weeks.  It was taken on the paddock of my old house.  Beyond the fence was the moor where roe deer and an ancient Welsh pony were my neighbours.  I still miss that house!

All these photos had already been posted to FB over the years but it was nice to look back and remember why I had posted them.  Like most people I know, I don't share much there so when I do it means something to me or my family.
Posted by Ali at 21:49 4 comments: 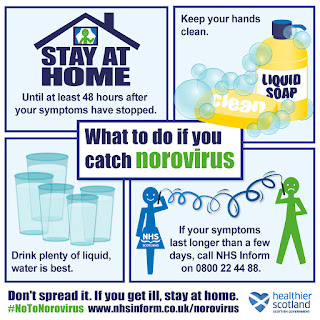 So this week we've had truly horrendous weather thanks to outgoing Storm Ciara and incoming Storm Dennis. I've had yet another nasty chesty cough virus. And to finish the week off, my school has had a Norovirus outbreak.  And it started in my classroom!!  By the end of the day yesterday I only had 7 children left 😷

Thankfully it's now half term for the kids so next week the whole school is getting a deep clean.  I have 2 staff development days on Monday and Tuesday then I'm on holiday for the rest of the week.  So far none of the staff have caught it.  We have been meticulous in washing our hands!!!  Hopefully by the time we go back it will have died off. 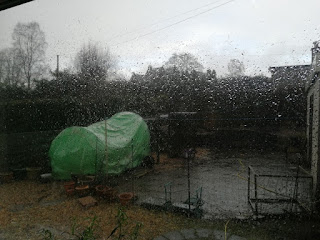 Email ThisBlogThis!Share to TwitterShare to FacebookShare to Pinterest
Labels: polytunnel 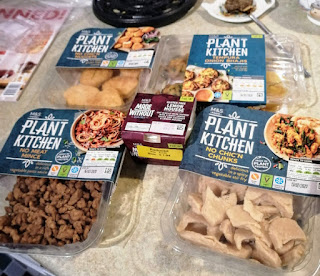 I popped into M&S as I had vouchers to spend and had a good look at their 'new' plant based range.  The problem with a lot of meat replacement products is that they're not gluten free.  So I was rather pleased to find these!  I don't think I've mentioned here that I did Veganuary, a whole month of not eating meat or animal products.  I managed to stick to it most of the time and found it was surprisingly easy to do.  I challenged myself to eat as many different plant based meals as I could last month and found I saved money as well.

There are loads of bloggers, vloggers and writers out there far more knowledgeable than me so I'm not going to bore you with any facts and figures.  But reducing meat consumption has a bigger environmental impact than cutting down on flights or using an electric car (I have considered both these options!) Even eating a few meals a week has an impact.

So, although I wouldn't describe myself as a vegan I am consciously not buying and eating meat or dairy products.  I'm still going to eat the eggs my own chickens produce and for now will still eat local honey as it has so many health benefits.

Eating a plant based diet will save the environment, save money and has many health benefits. So I'm hitting 3 of my 2020 goals in one!
Posted by Ali at 18:48 8 comments:

1. Create a retirement plan to retire from teaching in 2021
2. Turn the extended part of my house into an Air BnB
3. Save, save, save
4. Reclaim my back garden
5. Stay fit and healthy
6. Grow more fruit and vegetables
7. Work harder to reduce my environmental impact