*waves and says hello to everyone who has popped over from Rhonda's blog*
Once upon a time (not that long ago!) I used to buy premium organic vegetables.  I still believe that veg grown organically is better for you but have to cut my cloth according to my purse atm.  Once I move house I will put up my huge greenhouse and grow my own again but until then I buy whatever is on special offer at the supermarket. This week it was carrots, peppers and aubergines.  I also got 1kg bag of onions.  4 big bags of vegetables for less than £5.

I've been wanting to encourage the veggie teenager to be a bit more adventurous so when someone recommended Mary Berry's Spiced Lentil and Tomato Moussaka I knew what I was going to make.  (it's not got any spices in it so dunno why it's called spiced!!) 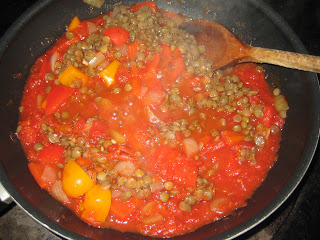 In my trusty wok there's onions, peppers, tinned tomatoes, cooked green lentils (recipe said Puy lentils but I didn't have any), veg stock and mango chutney.  I let it simmer away until it was thickened. 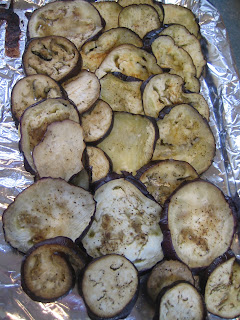 I sliced my aubergines and brushed them with oil and baked them in the Aga for 15 mins.  Recipe said to grill them for a couple of mins.

Then I made some cheese sauce.

Then I put a layer of veg mixture, some cheese sauce then a layer of aubergine and repeated.  I topped it with cheese sauce.  I still had half a pan of mixture so I made a lasagne as well using lasagne sheets instead of aubergine between the layers. 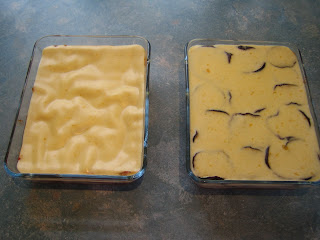 Lasagne on the left and moussaka on the right.  Both are in the fridge ready for the oven at some point over the weekend.

I've also made a pot of carrot and lentil soup.  Just what we need in this damp cold weather :-)
Posted by Ali at 14:56

Email ThisBlogThis!Share to TwitterShare to FacebookShare to Pinterest
Labels: under a fiver meals