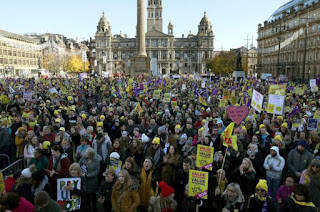 Yesterday I went on a demo march and rally in support of fair pay for teachers.  Between 20 and 30 thousand people marched through Glasgow to George Square.  It was magnificant!  People applauded us and cars tooted support.

Out of the 36 OECD (Organisation for the Economic Co-operation and Development) countries, Scotland's teacher salaries are in the bottom 5.  And we're the lowest paid in the UK.  On average, teachers work an extra unpaid 11 hours a week.  That's an average, so people do more than that!

We're asking for 10%.  We won't get it but we 're hoping that we'll get a better offer than the current 3%.  Police officers here have just been awarded 6.5% and they deserve every penny.  Public sector workers have had their salaries frozen for years under austerity measures and now people are really struggling as the cost of living has gone up.  In real terms, my salary is worth 24% less than it was 10 years ago.

I've said before, teachers are leaving the profession in droves.  They're over worked and underpaid.  In my local authority (it's not that big) we have 4 primary schools without permanent headteachers. One more resigned this week saying she's had enough of education.  She's 42.  No one is applying for the vacant posts. Frankly, education in Scotland is in crisis.

*gets off soap box* 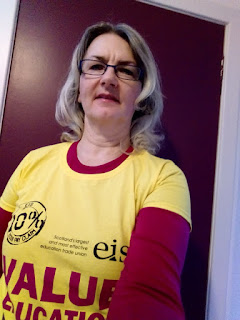 Here I am in my fetching yellow t shirt ready to go!

On the bedroom front, I'm just waiting for the carpet to be delivered and fitted.  Photos and more details coming soon!
Posted by Ali at 08:30