Waste of space aka how not to design a kitchen 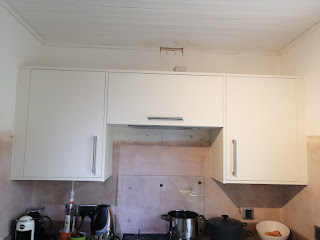 I'm really not happy with my kitchen, now that I've lived with it for a wee while.  The design is not a good one.  Despite having more cupboards I've actually got less storage due to several areas of wasted space.  There is a gap of 30cm/12" between the top of the cupboards and the ceiling.  I couldn't get taller units to make better use of the space. 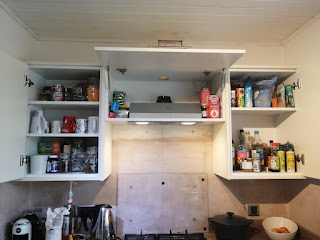 Due to the positioning of the holes for the clips to support the shelves, I've had to take out a shelf (on the right) because it couldn't even accommodate the height of a 1 litre bottle of oil or my salt and pepper mills.  The 'cupboard' above the hob houses the extractor fan but isn't much use and it gets hot when the lights are on.

Also notice in this photo that the tiny glass splashback is so useless there are already splashes on the wall above it. 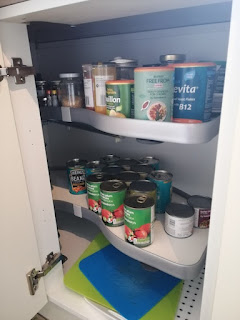 This space saving caddy is just a gimmick.  This is a double sized cupboard with only 1 door because it's in the corner. And the caddy pulls out so you can reach stuff at the back.  Brilliant except it hardly holds anything and you can't store anything under it because of the huge mechanism.  I can just about fit 2 trays and these chopping mats. 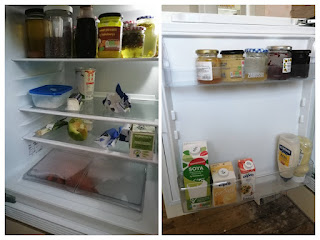 This is the fridge.  There are only 2 door shelves and they only fit in 1 place.  More wasted space.  The vegetable drawer at the bottom is fixed and has 2 flaps on top.  If you put anything on top you have to move it to open the drawer. 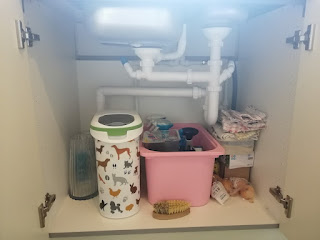 They couldn't fit the shelf under the sink as the holes for the shelf support were in the wrong place for it to sit under the waste pipe.

I know this is a bit moany but I used some money I inherited to get something a bit special that I wouldn't normally have splurged on.   I've paid £13,000 (about $17,5000 US) for a quality kitchen and frankly it's not.  It's a very nice kitchen but has so many impractical issues.  I've never installed a kitchen before so went to experts to get their advice.  I spent over 3 hours in total with 2 designers who took my wish list (lots of storage as it's a small kitchen) and created this.  I couldn't actually see some of the things in the showroom (had to use CGI stuff) and was guided by them in my choices.  My chosen  dishwasher and fridge were unavailable at the time of installation so they chose a higher spec substitute for me for the same cost.

I'm going to name the company as Wren.  I chose them because their units were factory built and not flat packed.  But so many things came damaged I don't think that's necessarily a plus.  And they've STILL not come back to fix the things I mentioned previously HERE

So, I'm taking control of it myself and will work on it to get something close to the fabulous kitchen I thought I was getting.  I've ordered posh storage boxes and plate racks to maximise space.  I'm removing the stupid caddy thing and the glass splashback.  I'm tiling behind the hob.  I'm putting up some open shelving, then I'm going to decorate it in pink and black 😎 and put down a lovely floor.

There's still 50% of the 'extra installation costs' to be paid.  If they don't come back soon they can whistle for it!!!