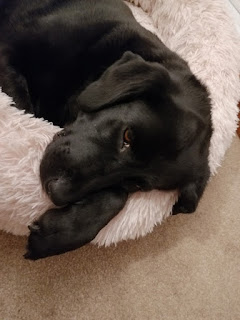 You know that saying that goes along the lines of when you makes plans God/the universe laughs?
I dropped Emma at the vet this morning for some tests and a biopsy this morning.  She has a very large lump on her tummy that needs looked at plus she needs her ears cleared out again.  Both procedures will done under general anaesthetic.  This was a planned event so I knew it would be costly.  However when the vet casually said this morning it would be around the £1200 mark I actually gasped and said yikes!!  She had her ears cleared out 2 years ago and it was just over £350 so I was expecting the extra tests to add a bit more.  But not more than triple the cost!!!  Oh and did I mention she's not insured??  There goes that £1500 I have in my savings!  She's totally worth it though 💖 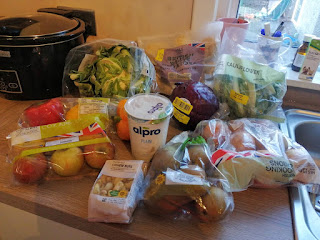 Since I was in town any way I popped into M&S as I had £11 in vouchers.  Lots of veg was reduced.  I got potatoes, 2 cauliflowers, red cabbage, 3 peppers, bag of apples, bag of pears, onions, cashew nuts and a tub of soya yoghurt.  Total cost £11.38, so only actually spent 38p.  I'll do some cooking today to keep me busy and make enough meals to see me through the week as I'm back at school tomorrow.
I'll collect Emma after 4pm.  Poor wee soul 🐶
Edit:  She's fine but groggy.  Results in 2 weeks.  Cost £1038 in the end
Posted by Ali at 10:56