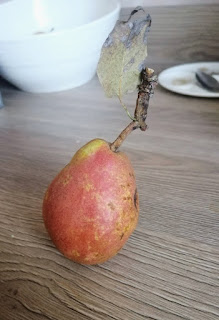 My pear tree grew a single pear.  I haven't eaten it yet as it hasn't ripened.  Pears don't ripen on the tree so it's a waiting game to choose the right moment to eat it at it's best! 😋

September flew by!  I can't believe we're into October already.  There's 1 week of school left (HOORAY!!) then we get a 2 week break.  But my 2 week break will be filled with decorating and moving furniture between my house and the flat. Ah well, it'll be good once it's all done.

September spending was very low.  I hadn't planned to have such a low spend month but it just worked out that way.  I mentioned previously that I've spent around £100 on stuff for school and I had to get petrol for my car.  Other than food, I haven't spent money on anything else.  Total spend for the month was £316.89!  That means I can put an incredible £1114.74 into my savings!!! 🤯

So after 9 months of saving I have £9492.52 in my savings account.  I'm almost at my £10k target for the year!!  I can't believe I've managed to get this far.  I used to think I was pretty frugal before I started this 4 year challenge but I've had to seriously up my game this year!

Email ThisBlogThis!Share to TwitterShare to FacebookShare to Pinterest
Labels: 4 year challenge, end of the month totals