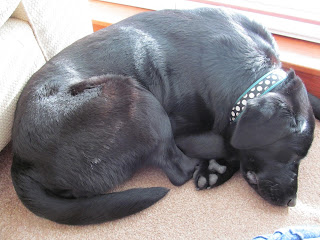 ... makes me a very dull, tired, grumpy and fed up girl!!  Although Emma doesn't seem to mind! All I seem to do atm is go to work, think about work and then do even more work at home.  There is no life/work balance.  I'm not enjoying teaching this class, they're very needy in lots of different ways.  I now have 30 (that's the legal max for this age group) and 12 of them are on Staged Intervention.  Plus at least 6 more with behaviour issues and one who barely speaks English (although she is a wee sweetheart). I have to admit that I am stressed.  So it's important that I try harder to do more fun things completely unrelated to school especially at weekends. 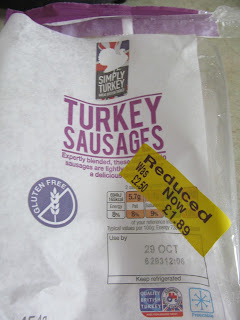 I scored some yellow stickered turkey sausages yesterday.  I've had them before (also reduced) so knew they're delicious.  I simmered them in some pear cider (bargain from Lidl) and prepped them for a couple of meals next week. 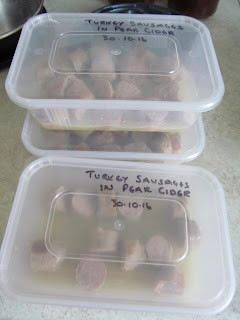 I took one to my eldest son for his dinner tonight. 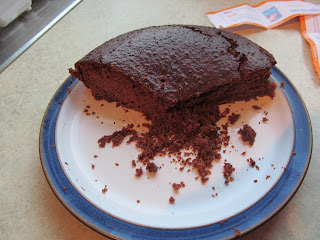 I also made a chocolate cake 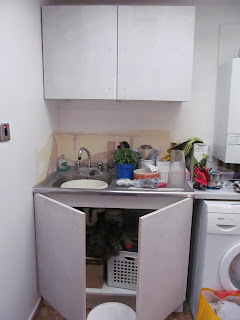 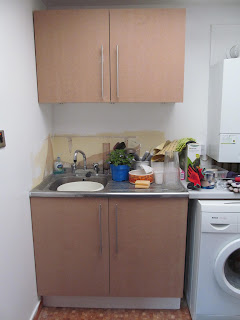 I finally got round to start painting my utility room cupboard doors.  My dishwasher door took 3 coats of emulsion then 3 coats of cupboard paint.  So I'm hoping to get them finished this week at some point, 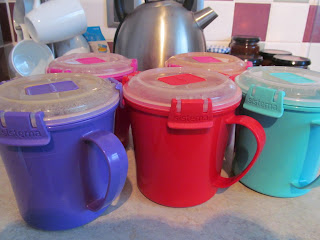 I've also made a huge batch of lentil soup so that's lunches for work sorted for the week.  We get an hour for lunch and I usually work through it, having my soup at my desk while I mark jotters.  I know that's not healthy but when you've got 30 jotters from every curricular area covered that morning there's not much choice.  It's either done at lunchtime or at home *sighs*
Posted by Ali at 17:15 1 comment: 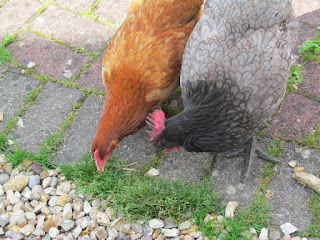 When I went out to open the coop this morning I found my favourite chicken Merida dead.  Totally unexpected as she was just over a year old.  Yesterday she was free ranging round the garden despite the pouring rain.  When I closed up last night all 3 were snuggled up together.  This morning she was curled up by the door.

I'm hoping it was just one of these things and the other 2 are ok.

Email ThisBlogThis!Share to TwitterShare to FacebookShare to Pinterest
Labels: chickens

End of the holiday 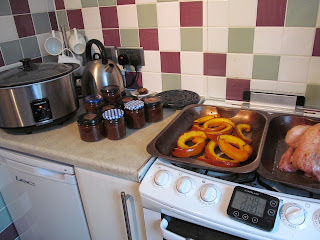 That was a quick week!  Although I did pack a lot in with a trip to Brighton at the start and then a couple of days in St Andrews in the campervan.  So this morning it was back to my normal weekend routine of shopping/cooking/housework.  After a trip to Sainsbury's it was a morning of roasting chicken and pumpkin, making chutney and putting a beef casserole in the slow cooker.  Sainsbury's had a lot of their frozen meat reduced, probably to make way for Christmas stuff.  So I got 2 x 500g bags of diced British beef for me and a pulled beef meal for my eldest son.  All at half price.  Worth checking out your supermaket freezers for good deals just now! 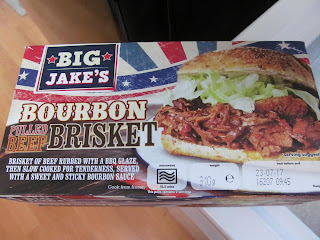 It looks tasty but contains gluten! 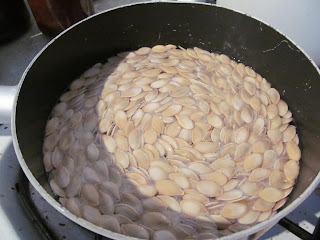 In the spirit of making good use of everything I had a go at roasting the pumpkin seeds from my pumpkin.  I followed this recipe where you boil the seeds first in salted water before roasting. 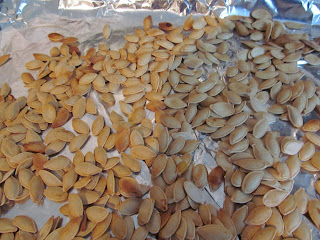 They're absolutely delicious!  Worth the fiddliness and they're free :-)

Tomorrow I need to do some prep for going back to school *sighs* and more housework chores.  It just makes life easier when I get in from work each night.

Email ThisBlogThis!Share to TwitterShare to FacebookShare to Pinterest
Labels: free food, holidays, savings, slow cooker, use it up

A use it up day 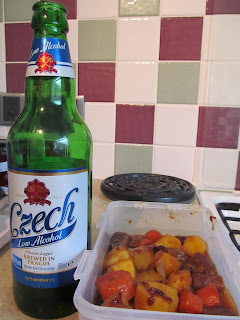 I went to visit my parents yesterday.  My lovely mum had bought some low alcohol beer by mistake and offered it to me.  Sadly beer is one of the things I can't have as it has gluten but I knew I could use it up in something for my eldest son. He had given me some leftover cracked pepper beef sausages so I made him a sausage in beer casserole using up some of my onions and OH's potatoes. 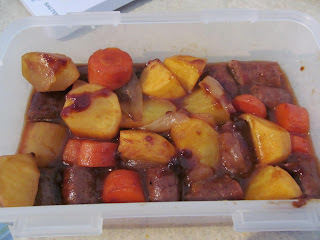 It smelled delicious so I hope it tastes delicious! 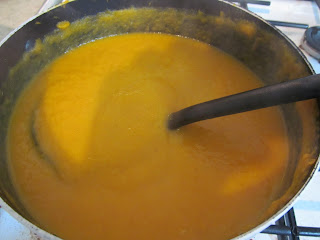 My lovely mum also gave me the remains of a bag of parsnips so I chopped them up with the sad carrots from the bottom of my fridge and some onions.  I sprinkled some ground cumin over the lot and roasted them for 45 mins.  I had half a wee carton of Alpro cream in the fridge so blitzed it all together with some veg stock and turned it all into Roast Root Soup.  That's 3 lunches for school next week sorted. 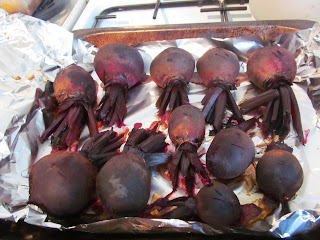 I pulled the last of the beetroot from the raised beds and baked them in the oven.  They're now sliced and marinating in spiced vinegar as per this Pickled beetroot recipe.  Yum!

Tomorrow will be another use it up day as I've got apples, plums and rhubarb from my lovely mum's garden that will need to be used.
Posted by Ali at 15:40 1 comment:

Email ThisBlogThis!Share to TwitterShare to FacebookShare to Pinterest
Labels: use it up 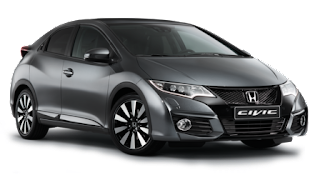 I mentioned recently I'd bought a new car.  I wasn't planning on changing my car (Honda Civic).  I got it brand new nearly 3 years ago not long after I started working again.  I had a deal that involved me paying a deposit then making a monthly payment for 3 years. I then had to pay the balance off and the car would be mine outright.  And that's what I was planning to do in February.  I'd been saving up so the money was already there.  My almost 3 yo car had a very low mileage (11,000 miles) and was in good nick.  I was happy with that deal.

But then I got a phone call from my dealer to say they had a special offer (yeah right!!) and had 10 brand new cars just like mine but the Sport version.  I wasn't really interested until they said they could buy out my contract and just swap my old car for the new one.  Still not tempted.  Oh and it would be cheaper monthly payments.  Now I was interested.  How much cheaper?  Just under £40 a month!  Enough for me to seriously consider it.

Turns out the Civic is getting an upgrade in 2017 and they wanted to get rid of their backlog of the current model.  I read all the small print.  It really was a good deal.  So I agreed.  I collected it today.  It looks like the one above except it has black alloys (whatever that means)  It has lots of fancy gadgets like reversing cameras, cruise control and a special braking 'thing' that stops you hitting another car.  All I care about is it's nice to drive and I have piece of mind that my car will get me safely where I want to go. And I've cut some of my monthly costs.

When The Teenager went off to university it was agreed that his dad would fund him (part of the divorce settlement) and so he would meet his own costs.  So from the end of this month I am no longer paying for his phone contract (£33), his contact lenses (£16) and his TKD membership (£46). I'm also going to cancel my Tesco pet insurance as it's gone up from £15 a month to £39.26!!! Not sure if I'll take out another policy yet.  I'm also planning on changing my bank account from a fee paying one (£13.50 a month) to a free one that rewards me for using it.

With all these changes I make that savings of just under £190 a month.  Or a whopping £2280 a year! YIPPEE!!!! And when my own phone contract is renewed in December I'm hoping to save a few more pounds. 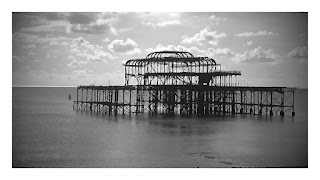 I've just spent a few lovely nights in Brighton visiting my middle son and spending some 'us' time with OH.  I've mentioned before that my son works for Hilton so we get their Friends and Family rate.  This means we get to stay in a very nice room for a fraction of the cost.  And if the hotel is quiet we sometimes get a suite!  The hotel was quiet this weekend ;-) 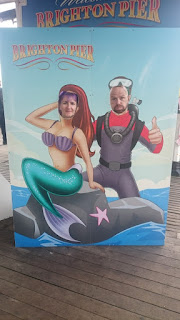 We did a few touristy things but mostly just enjoyed walking along the promenade in the sunshine and browsing the vintage shops in The Lanes. 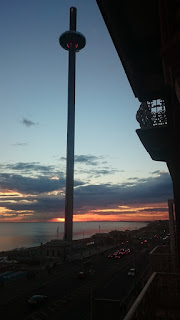 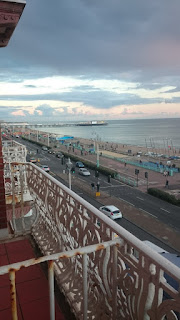 Our room had a balcony overlooking the sea.  Looking right was the recently opened i360 (we went up it even though I'm scared of heights!) and looking left you can see Brighton Pier in the distance.  The original pier (top photo) fell into disrepair and eventually burnt down.  I think the remains look rather beautiful and dramatic.  I took loads of photos trying to capture the right image of it.  I rather like that one!

We did splash out on a few very nice meals. But on the whole it didn't cost too much for the break with the cheap hotel rate and budget airline tickets.  Getting away from everything was just the tonic I needed!
Posted by Ali at 20:56 2 comments: 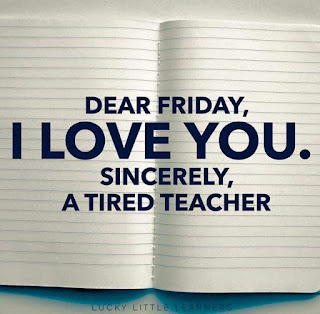 It's Friday and I'm now on holiday for a week.  I'm unbelievably tired.  I'm currently at the weepy tired stage and just want to sleep.

OH has booked a short break for us both (it was a surprise) and I'm really looking forward to it.   It's the first time in ages we've got some time for us as a couple with no teenagers in sight.  OH and I do not live together (yet) despite being together for 5 years.  It was too complicated with exes and our respective kids. So couple time is rare and precious.