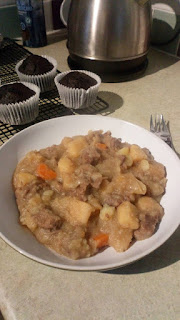 Thanks to everyone who contributed to Saturday's post on Friends. It's good to know we're not alone in our thoughts and is something I'll be coming back to very soon.

Yesterday was a chilly day that called for proper comfort food.  I made a roast beef dinner with all the trimmings on Saturday night for OH and The Teenogre.  I had some beef and roast veggies leftover so added a few raw potato cubes and made Stovies.  Essentially it's a leftovers dish (traditionally made with the leftover meat and gravy from a Sunday dinner) so it's a cheap filling dish. But there are loads of different ways to make it.  And all of them are traditional! 😆 My version is to put chopped up cooked beef, gravy, carrots, onions, potatoes in a big pan (wok!) and simmer together until the potatoes start to break up. Some people use sausages or corned beef. Some people make it in a casserole dish and put it the oven.  It gets a crust on top.  Do you have a version and what do you call it? 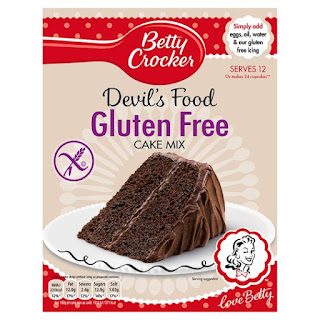 On impulse I bought this GF cake mix.  It was amazing!! I filled one sandwich cake tin and 5 muffin cases with the mixture.  You can just see some muffins in the photo above.  We had the cake (no icing) with Alpro custard.  Definitely recommend it for a treat!
Posted by Ali at 17:15 8 comments:

Do you have a circle of friends you can call on for support, a laugh or a glass of wine?  Or maybe you have a best friend who has been with you through thick and thin since school days.  Then you're lucky, very lucky.  I have neither.  I started this post over a week ago and waited to see if I felt any better for writing it (I may delete it in the end) But then I read Frugal in Norfolk's post this morning and realised I'm not alone.  So here goes.

Let's back up a bit.  I hated secondary school.  For lots of reasons it wasn't a happy experience.  I had a few friends but when I left I only kept in touch with 2 of them.  After a short while only M and I stayed in touch (phone and letter as it was pre computers!)  She was training to be a nurse and I was doing my teacher training. We went to each other's weddings but I had my children very early and we lost touch beyond the annual Christmas card.  TBH I don't think she liked my ex. Then Facebook happened and we stayed in touch that way.  A few years ago without any warning she took herself off (I think she had some online hassles) and we've lost touch 😔 She has my address here but I don't have her current one.  So for the last 3 years I've been waiting for her to contact me.

Pre divorce I thought I had a wide circle of friends.  We moved around the country a bit with the ex's job but I worked hard on staying in touch with people. Some of them were very good friends.  We went on holiday with some of them.  We even helped some of them financially (that's a whole other story!) Our house was the social hub for the ultra running community.  I've lost count of how many dinners/weekends/bbqs/parties I hosted and catered.  When we split people were sympathetic and I continued to get invited to a few events that didn't include my ex as most people were shocked by his behaviour.  A few friends even refused to speak to him.

Until one day a good friend invited me to dinner with the words "We've invited your ex and his partner as well so can you all sort out between you who comes?"  I didn't go partly because I didn't want any public confrontation but I was also very hurt. Then most invitations were issued along the same lines and someone actually told me I "should be over it by now."  Yeah, being left after 24 years of marriage for someone in our friends circle and her putting it all over Facebook was easy to get over in a few months!  The final straw was being told that "I don't like your ex or what he's done but we have to be friends with him because of who he is."

It would be easy to say they weren't real friends anyway.  But in the aftermath of the initial split some of these friends were on the end of a phone in the middle of the night.  Some drove miles to hold my hand and cry with me when I needed it.  I thought that was real friendship.

But they're not here now.  Once I sorted my new life out they practically disappeared despite my repeated efforts to stay in touch.  I get an occasional comment on my FB posts but nothing in person.  There's only so many times you can suggest coffee/lunch/dinner without them confirming a date.

It's hard making new friends when you're older.  I had great work colleagues in my previous school and we socialised but again they're not really in touch.  My current colleagues are lovely and we've socialised a few times so I do have a bit of a social life beyond OH.  But we're all at a different stage in life so work is all we have in common.

I spend a lot of time on my own.  I'm an empty nester with a partner who still has his own house with a dependent child.  I know where we're heading but it's still a few years away *sighs*  I'm content with my own company and I'm never bored.  I'm blessed in so many ways and don't want to be moany about it.  But it would be nice to have someone remember I'm still here and suggest we get together for something.  Anything...
Posted by Ali at 21:46 22 comments: 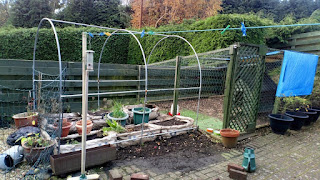 I finally gave in and took down the polytunnel cover.  It had degraded so much that the tiny pieces of plastic looked like snow all over the ground.  I'm undecided whether I should leave the structure up and try to re cover it in Spring or just take the whole thing out and go back to having a veg patch.  I'll decide in the new year. My garden is pretty much shut down for Winter now with just leeks and sprouts the only things still growing. 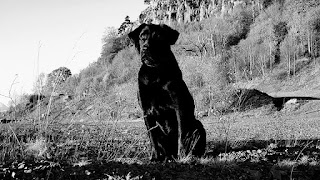 Life has been a bit humdrum lately.  Work, gym, painting, sleep and repeat/repeat/repeat.  I've been fighting off yet another nasty virus and an outbreak of cold sores.  I'm hoping that's the reason I've been feeling so low this past month or so.  Really fed up with a few things going on atm.   At least Emma keeps me smiling. 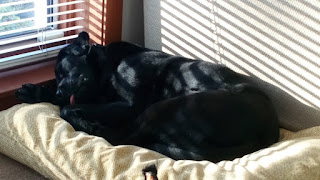 I've finally got to the stage where I'm getting my new living room carpet fitted in a week's time. I've reconfigured the layout and taken out a lot of furniture for a more minimalist look.  I think it works and I know Emma likes her new posh bed! 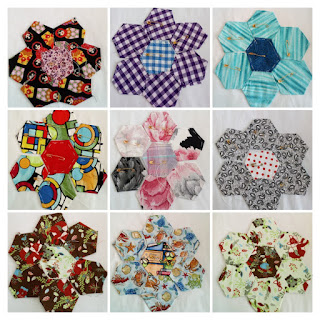 On the work front I've introduced patchwork to my Fab Friday group (all teachers have groups of kids to teach 'life skills')  I've got 20 kids from age 8 to 12 and so far we're doing ok.  Threading needles seems to be their biggest challenge!! But they've learned a wee bit about the history and frugality aspects and are so proud their creations.  All the fabric has been donated by my lovely mum and her quilting class so they're learning about using up scraps of leftover fabric.  I'd forgotten how satisfying it is turn wee bits of cotton into pretty 'flowers' so I've even started a project of my own 😊
Posted by Ali at 10:24 6 comments: