We've had a run of beautiful sunny days here in Central Scotland just as schools have gone back  although we've also had some below freezing nights too!  I spent yesterday re potting my tomato and chilli plants and weeding my back garden in glorious afternoon sunshine.  I was delighted to find that my 5th asparagus crown has survived and is shooting up a tiny spear already.  The other spears were frost damaged so I had to cut them off.  I hope there's enough growth to keep them going until next year's harvest 😋 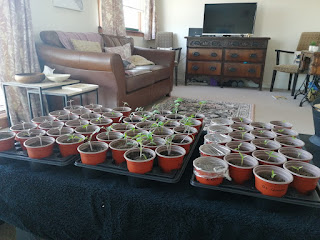 I'm running out of space to keep my seedlings before they can go outside into my mini greenhouse to harden off.  So this is the current batch in my living room 😂 It's only for a few weeks but I think I'm getting quite obsessed with my plants! 🌿🍅 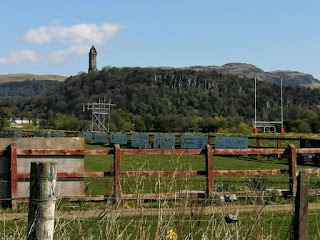 I was up sharpish and at the plot bright and early.  Stunning views as always towards the Wallace Monument, Dumyat and The Ochils. 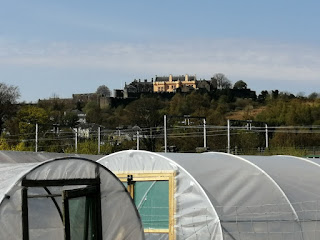 And here's Stirling Castle up on the other side.  Not the best view of it (better from the other side, more castley!) but it still makes me smile. 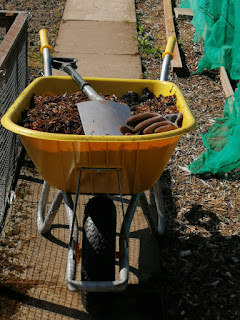 I'm sore tonight from moving slabs and fence posts, digging trenches for potatoes and filling wheelbarrow loads of woodchips.  Better than a gym workout and free!!  I'm also developing a lovely tan!
I realised I didn't have a pen with me to write in my notepad so I've started noting the planting dates on the notepad function on my phone.  Get me!  I'm finding myself using technology more and more especially at work.  It's now officially known that I'm one of the P1 teachers next session so I now have control of the Transition from Nursery to School online "stuff."  Apparently I'm the admin but as yet I haven't been able to access any of it!! 😂 Better brains than mine are 'working on it!'
As it's the summer term I've treated myself to some new clothes, mainly long floaty dresses to keep me cool in my furnace of a classroom 👗 So many people this week commented on lovely I looked which made me think I must have looked pretty scruffy before!! 😂  I haven't set a clothes budget for this year yet.  Last year I hardly spent anything as I lived in jammie trousers with a smart top for those online lessons!!  But I've already bought myself new walking boots 👢 2 pairs of jeans 👖 and some nice underwear 👙 All sensible and much needed but I'm scared to add it all up!!
Posted by Ali at 18:29